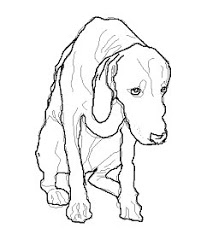 Experiments on dogs
The psychologist Martin Seligman performed experiments on dogs.  When dogs were repeatedly hurt by electric shocks from which they could not escape, they eventually stopped trying to avoid the pain.  These dogs curled up and became helpless.  When the dogs were given the chance to escape, they made no attempt to do anything, even as they continued to be shocked.  Psychologists call this phenomenon learned helplessness.

Learned helplessness in people
It is a common misconception to believe that most people will do whatever they can to escape a bad situation.  In reality, people who don’t feel like they have any control over their situations eventually learn to helplessly accept their circumstances.

When you’ve been pushed down with multiple setbacks and adverse events, it’s hard to be optimistic.  If someone goes through a series of failed attempts to accomplish something, their brain learns to believe that an outcome cannot be controlled.  An individual can become conditioned to behave helplessly, even if opportunities to escape become available.


It’s about perception
After the financial crisis in 2008 and 2009, many investors saw doom and gloom in the stock market.  They decided that hoarding cash was more stable than equities, even though inflation is guaranteed to diminish the value of cash.

“The stock market is rigged”

Many Americans don’t want to read about investing on their own, even though it can save them thousands of dollars in fees

“I can’t handle investing on my own, so I’ll have my financial advisor do it for me”

Learned helplessness is one of the reasons why the poor continue to stay poor.   Many of the poor have learned to believe that they will never get out of living paycheck to paycheck.  It should be no surprise to hear that the poor play lotteries in much higher numbers than any other income class.  They truly believe that the only way to become rich is to win the lottery, or marry into money.

“I’m not smart enough to be successful”

“I will never make enough money to start saving and investing”

If people perceive events as unpredictable and out of their control, they lose hope and behave helplessly.  They don’t bother trying to make changes to their situation.

“Things will never change for me”

“It’s all my fault, I can’t do anything right”

Optimists versus pessimists
Optimistic people believe that setbacks are temporary and that they have the power to make real changes.  Pessimists believe that nothing they do will make a difference in their life, and that is why they are destined to never live up to their full potential.

When you get denied a raise or promotion, instead of just sulking and thinking "I'll never ask for more again," reflect on what went wrong and then work on your negotiation technique.

Leaned helplessness affects more than just your financial life
Over one third (35.7%) of adults in the United States are obese.  These individuals have let their physical health deteriorate.  When people believe they do not have the power to change their health, they neglect a healthy diet and avoid exercise.

“I can’t lose weight because I have a slow metabolism”  said by an obese woman while sipping on a Diet Coke and eating McDonalds.

Young adults and middle-aged parents are more likely to suffer from depression if they have a pessimistic outlook on life.  They are more likely to have weakened immune systems and less effective recovery from health problems.  They are poor problem solvers, and tend to be unsatisfied with their jobs and relationships with others.

Individuals who have failed repeatedly in the past tend to have poor motivation, believing that they are not able to improve their performance.  Children with learned helplessness tend to be less motivated to succeed, have poor social skills, and give up easily.

People who develop social loneliness tend to stay shy and passive, leading to awkwardness in public.  They tend to be viewed poorly by others, which may lead them to stop trying to engage in social situations, further reinforcing their learned helplessness.  Their awkwardness furthers their awkwardness.

Don’t overlook opportunities for change and improvement
When it comes to your finances, you need to stop learning to be poor.  It’s time to take control and reach for your potential.  Here are five steps to getting started:

1.  Realize that change is possible.  If your situation can get worse, it’s also possible that your situation can improve.  If you’re living paycheck to paycheck, track your spending to figure out why and then develop a budget to achieve financial success.

2. Ask and receive help.  It can be difficult to step outside the box and look at your situation objectively.  Research information on Google to find help.  Ask a friend for advice.  Ask them to be brutally honest.  Feel free to contact me.

3.  Set goals.  Even the act of writing down a goal can jump start you from inactivity.  Just make sure you set realistic goals.