I'll admit it, I love taking a good, hot 10 to 12 minute shower daily.  I find showers to be one of the few things I find relaxing.  Sometimes I take a shower to help me wake up in the morning and I always take a shower after my 30 minute bike commute home.

According to the Environmental Protection Agency (EPA), showers account for nearly 17% of indoor water use.  A typical 10 minute shower uses up to 25 gallons of water from a 2.5 gpm shower head.  Showers also use up energy to heat and deliver water to your shower head. 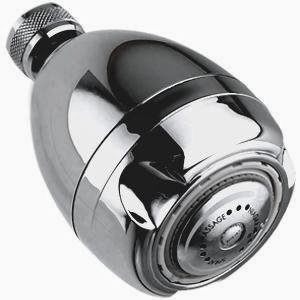 Low flow shower heads offer an inexpensive and easy way to save water, money, and energy.  Low flow shower heads can reduce the normal flow rate by 1 gallon of water per minute and reducing water usage by 40%. I've read estimates on how much money we can save on water and energy costs ranging from $70 to over $150 a year. This savings can be especially important if there are several people living in your home. At any given time, we have 4 people total in our home (me, my wife, and 2 roommates).

While the benefits of using a low flow shower head were clear, this was a purchase that I kept putting off and forgetting about.  Maybe I should have put it on my to-do list earlier.


When we recently needed to order a few more dollars to fulfill the $35 threshold for free shipping from Amazon, I added this 1.5 gpm shower head.   The cost of the low flow shower head was only $7.99.

I will admit that the water pressure was noticeably less than our previous shower head. At first I wondered if our showers would actually take longer since we weren't getting as much water pressure. However, adjusting to the new water flow was not an issue for us. After two days with our new shower head, we decided to throw our old one into the trash.

I'm always looking for easy ways to save money on our monthly bills.  We've already mastered the art of killing our electricity bill with each month's bill less than $40.

Our water bills have been more costly.  Our last 4 water bills were: $89.80, $96.84, $86.28, and $75.72.  The amounts have been decreasing since we've been trying to take shorter showers, and use the washing machine less. With some rain lately, we've also slightly reduced our lawn sprinkler use.


Getting a low flow shower head is one of the cheapest ways to save water and money.  We like ours so much that we just ordered another one!  I expect our new shower heads will put a dent in our monthly water bill soon.

You can pick up your low flow shower head on Amazon here.