My family just suffered a $1,000 setback.  Here's what happened: 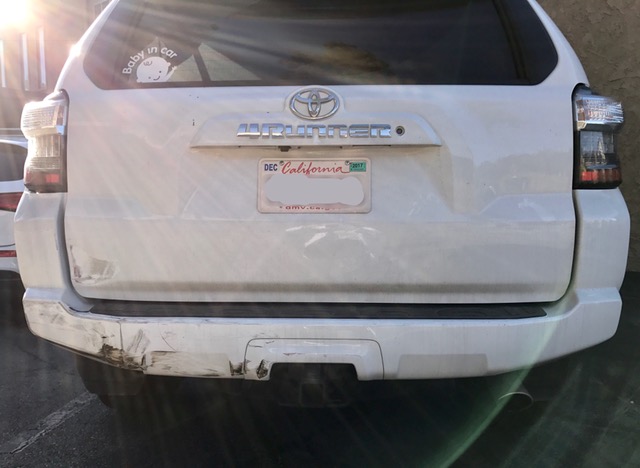 Last week, I was slowly backing the car out of the garage and onto the street. One of my neighbors was driving extremely fast down the road.   The other driver tried to swerve out of the way but could not do it in time, and we collided into each other.

As soon as our cars crashed, my first thought was about my son; he was in the back seat of our 4Runner, strapped into his car seat.  While the sound of the crash was pretty loud, the impact barely moved our car.  My son was fine, happily flipping through a book he was looking through as I was backing out onto the street.  My second thought was about the occupants in the other vehicle.  I quickly went to check on them.  I was glad to see that everyone was fine.  There were no injuries and no air bags went off.  However, the other car had quite a lot of damage where our cars hit each other.

My neighbor was very nice about everything and we had a nice chat. We exchanged our licenses and vehicle insurance information (we both had GEICO auto insurance).  When I called GEICO, a representative explained to me I was likely going to be found 100% liable for the accident since a car already driving on the road has the “right of way.”  She told me “it doesn’t matter how fast a car is driving down a street, a person backing up into oncoming traffic has to stop.”

I didn’t want to accept fault completely without at least trying to dispute the charge.  Our home driveway has kind of a blind corner for incoming traffic. That's why I always back out extremely slowly whenever leaving the house.  I gathered and sent several photographs of my neighborhood and even used images from Google Maps to demonstrate the blind corner for oncoming traffic to my insurance adjuster.  I wasn’t trying to prove that I was not at fault at all for the accident, but I was hoping that the adjuster would side with me and conclude that maybe I was only 50% or 75% at fault.

After a day, GEICO still held me 100% liable for the car crash.  The rep reminded me that if I wanted to get our vehicle repaired, we would have to pay out a $1,000 deductible.  Ouch!  After getting off the phone, I immediately felt a rush of emotions hit me like a punch to the face.

I felt anger at how stupid I was to not back out more carefully.  I felt annoyance towards the other driver for driving too fast down the street. I felt regret for increasing our deductible to $1,000 instead of keeping it at $500.  We have a great rate on auto insurance currently ($596 per 6 months for 2 insured vehicles).  My pride was hurt.  Then I started thinking about all the things that we could do with $1,000: invest it in index funds, go on a week long vacation, put it in our savings account, contribute more to our son’s 529 college savings plan, or donate to charity.  There were so many great options for spending $1,000 compared to using towards a deductible towards repairs.

After a day or two of feeling upset, I finally accepted the $1,000 setback.  A few glasses of whiskey definitely helped☺. I’m glad that no one was hurt.  Although I spent quite some time cringing about it, I realized that there was nothing else that could be done.  The crash happened, and it was time to move on.  Spending anymore time dwelling on the details would just be a waste of my imagination.  We do have a very healthy emergency fund, and $1,000 is not a lot in the grand scheme of things.  It’s less than 0.1% of our net worth.  We make over $1,000 a month consistently in side hustles.  While this is a minor financial setback for us, the cost of repairing our vehicle out of pocket would have far exceeded our deductible.  I’m glad our car is fully paid off and we don’t have any monthly auto loan expenses.

2017 has started off as a good year with our spending cut back considerably and both of us receiving nice salary increases.  We are still on track to save a ton this year, and this helps us handle thousand dollar setbacks without too much stress.  If this accident happened many years ago when we were living paycheck to paycheck, then we would have certainly gone into credit card debt for this.

I have already changed my deductible to $500; it's only an increase of $43 for a 6-month period to cover both of our vehicles.  Psychologically, a $500 deductible is less upsetting than a $1,000 deductible.  My wife and me have now agreed to ALWAYS reverse park our cars into the garage and so we will be forward facing when exiting our driveway. This will never happen again. Lesson learned.

On a side note, now that we are reverse parking our vehicles, it reminded of this interesting discussion I heard on NPR radio years ago titled “Parking behavior may reflect economic drive.”  Drivers who took “elaborate effort to wiggle in [to] reverse” park their vehicles delay their gratification.  When they “back in and pay the price at the beginning, [they] don’t have to wiggle [their] way out when they leave.”  One researcher actually found a correlation between parking behavior and economic growth rate.  In China, 88 percent of cars are parked reverse.  In the United States, it’s less than 6 percent.  All I know is that heading out of the driveway in the morning is much smoother (and safer).

Having an adequate emergency fund makes sure that thousand dollar setbacks aren’t financial emergencies.  Back to saving and investing more.