Money problems are usually just the tip of the iceberg

This post is based on a summary of a sermon given by Pastor Michael Lee at our church in November 2011.

Floating icebergs have a significant proportion of their mass below the surface of the water. 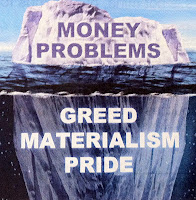 Our money problems are often superficial symptoms of a much deeper issue of greed, materialism or pride.  While the visible symptom may be financial hardship, the invisible symptom is much deeper, below the surface.

Greed
We develop intense and selfish desires for things we can’t afford. Envy may not be the root of evil, but it is the root of much wasted money.

Materialism
Our society shifts are attitudes to want more materialistic things: more clothing, more electronics, bigger homes, nicer cars, and more. When you spend all your money on shiny things that depreciate in value, you contribute to your own treadmill existence.  Being debt prone puts you as far away from being successful as possible. Actually being rich is way better than using debt to look rich.

Pride
We strive to maintain our excessively high opinion of ourselves to save face.  Many people who have money problems simply don’t ask for help when they know they need it.  Even worse, they drain other people's money to keep them on top of their financial downfall.

Money problems are rarely ever about money only.  If we only treat the symptom and not the cause, we will always have the same result. The solution too money problems is not only about making more money.  Making more money helps, but it won’t fix the deeper underlying financial problems.

A quick google search on “bankrupt celebrities” reveals tons of celebrities who have lost all of their fortunes.  Some of these celebrities include the likes of:

If you are always spending as much as you earn or more, you will NEVER increase your net worth, no matter how much money you make.  If you make an increasing amount of income each year and then spend it all, you are not getting wealthier.  You’re going nowhere, stuck on your own financial treadmill.

If you have problems with money, ask yourself how you got there and what is the true source of your problem.  Remember, it’s not just about money.