Pay your bills as soon as you receive them!

I used to wait until a bill’s final due date before paying that bill.  Whenever I received bills in the mail, I would open them to look at the balance and due date, then set the bill aside to pay later. 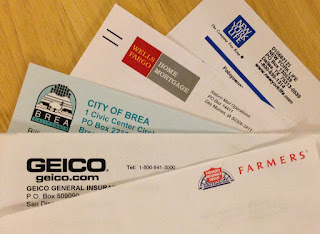 I remember a time when paying bills used to always stress me out.  Not paying my bills immediately led to several issues and big headaches:
A common argument against paying bills early is that people prefer to keep their money in the bank as long as possible “earning interest” before making a bill payment.  With today’s interest rates, the amount of money you’d earn by delaying a bill payment is insignificant.

Two of the best lifestyle changes that I have made over the last few years were to:


I have set up automatic bill payment for most of my bills.  Each month, I receive an email billing statement from my cell phone, gas, electric and water companies letting me know my statement balance charges and due dates.  Then these bills are set to auto payment and paid off automatically.
Paying these bills couldn’t be easier.  I just need to read my email, verify the charges, then delete the mail.

Paying bills as soon as they arrive relieves me of financial burden:

Everyone’s situation is different.  Not everyone may be financially in a position to pay all his or her bills immediately.  Many people live paycheck to paycheck.  If this is you, it’s time to consider increasing your income, or cutting your costs.

There are other ways to pay a bill immediately.  Most financial institutions and bill pay programs have ways to schedule a payment a few days before it’s due.  Instead of paying your bill the day before it’s due, why not schedule your bill payment right after receiving your statement?  You would have one less bill to worry about paying.

It may take several months to get on track.  But once you get in the habit of automating your bills or paying them off as soon as you receive them, you will never look back.