Edit: this deal is now expired!  The current promotion is 25,000 Starpoints (10,000 points after first purchase and another 15,000 after you spend $5,000 within the first 6 months of Cardmembership).  This is still an excellent promotion that I would not hesitate to recommend!

Starpoints are extremely valuable and flexible.  They can be used for both hotel stays and flights. Starpoints can be valued at a minimum of around 2 cents and up to 4 cents per point.

Hotel Points
SPG brands include Four Points, Sheraton, Aloft, W Hotels, Le Meridien, Luxury Collection, Element, Westin, and St. Regis.  There are over 1100 participating hotels in nearly 100 countries.  There are several categories of hotel stays in which you can redeem Starpoints.

As you can see, a basic SPG Category 1 hotel can be redeemed for 2,000 points each night.  The most expensive SPG Category 7 hotel will run up to 35,000 points per night.

Special fifth reward night free
A nice feature about Starpoints is that if you redeem five nights with your Starpoints, the fifth night is free at any category 3,4,5,6, and 7 hotel.

Let’s say you don’t have enough points for a free night.  You can use a combination of cash & points to get a significant discount on your next hotel stay.  This can also be used to stretch out the value of your Starpoints.

The first year of owning this card is free, so you can really test it out to see if it’s worth the fee.  After the first year, the annual fee is $65 a year.  Most frequent flyer travelers will agree that the SPG card is definitely a keeper.

Edit: My wife just applied and was approved!  SPG members who reside at the same address (within the last 30 days) can transfer points from one account to another for free! 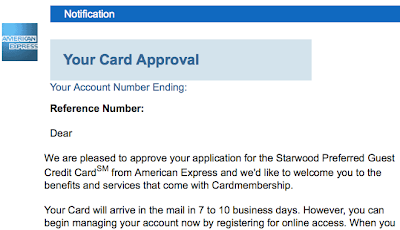 Advertising Disclosure: This site is an independent, advertising-supported comparison service. The owner of this website may be compensated in exchange for featured placement of certain sponsored products and services, or your clicking on links posted on this website.