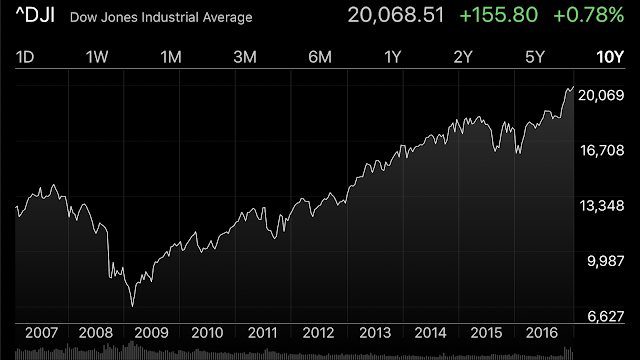 Today the Dow Jones Industrial average pushed passed 20,000 points, a new milestone.  What does this mean and should you care?

The Dow is a stock market index collection of 30 large American companies.  The Dow was founded in 1896 by the Wall Street Journal editor Charles Dow.  The Dow’s market value is created by adding up the share price of those 30 companies and dividing them by a random number called the Dow Divisor.  These are 30 random companies that the Dow has put together, and these companies aren’t necessarily the largest companies either.  Google, for instance, isn’t a part of the Dow.

Interestingly, the 30 companies that make up the Dow are not always the same and regularly get replaced.  As this article by the Conservative Income Investor explains, the stocks the Dow Jones committee chooses to make up the index can have a huge effect on the returns calculated by the index.  In March 1939, the Dow committee decided to remove IBM from the index and replace it with AT&T.  Later in 1979, IBM re-entered the Dow Jones Index, replacing Chrysler.  From 1939 to 1979, IBM ended up being the best performing stock in the US stock exchange.  Amazingly, $1000 of IBM stock in 1939 would end up becoming $41 million in 1979!  If the Dow had kept IBM in the index, it would have pushed pas 20,000 in 1975, and not 2017!

While the Dow IS an economic indicator, it’s a pretty crappy one.  It only tracks 30 companies, and these 30 companies don’t represent the entire US stock market properly.  If you really want to get an idea of how the stock market is doing, a better metric to follow would be the S&P 500, which is made up of 500 American companies.  The Wilshire 5000 index tracks 5,000 of the largest American companies and is another good metric to follow.  This being said, financial pundits still can’t stop hyping the Dow as a market index.

The only thing going for the Dow as an index is that it has a very long 120-year history.  I personally think that pundits refer to it because it is attached to a nice BIG number.  When you hear that the S&P 500 closed at 2,298 today, it just doesn’t sound as exciting as hearing that the Dow closed at 20,068 today.  Bigger numbers make bigger financial headlines.  Financial news makes a 100-point drop in the Dow sound scary, but it is really just a 0.5% change.

Planet Money podcast did a great episode on why the Dow is a terrible measure of the US economy.  You can hear the short and entertaining 17-minute podcast here.

While the Dow hit new highs today, so did the S&P 500.  And this suggests that investors see the economy improving.  New jobs are being added, unemployment is low, and consumers are confident.  Many investors believe that this could be a start of even greater stock market returns.  Other investors believe that these market highs won’t last long and that a crash is coming.

What should you do?  Ignore the hype and stay the course.  Keep saving, keep investing, and keep pushing closer towards your own financial freedom.