I fought my traffic ticket and won!

This post applies to anyone receiving a traffic citation in the state of California, where we live. 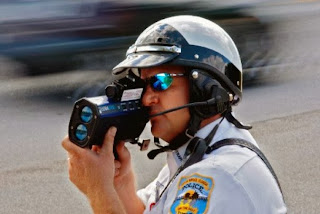 Next thing I know, a police officer stops me and gives me a traffic citation for “unsafe speed for prevailing conditions.”

I couldn’t believe it. I haven’t had a traffic ticket in over 8 years! Up until this moment, my driving record was completely clean. I always strive to drive at reasonable speeds without heavy acceleration. This makes sure that I am not only safe on the road, but I save money on gas (we only spend around $105 a month for fuel).

A month passed and I received my citation in the mail. I was blown away by the bail amount(s):

If I chose to pay my citation instead of attending Traffic School, I had to pay a fine of $525.00

99% of all people receiving a traffic ticket simply just frown, shrug their shoulders, and then reluctantly pay the full bail amount. If eligible, they can also pay ~$50 extra for the privilege of attending traffic school, then pay the traffic school of their choice $10-20, and finally then spend 400 minutes completing the traffic school requirement.

Chumps (Hey I was one of them the last time I received and paid for my ticket).

If you’ve already attended traffic school within 18 months, then you are no longer eligible to attend traffic school again. If you get points on your record, your auto insurance company may increase your rates or even cancel your policy.


I remembered a conversation I had with a friend of mine a few months ago about fighting traffic tickets by mail. In the past, I have heard of people going to court to try to fight their ticket, but I never knew that you could contest your ticket by mail. My friend mentioned that she had previously contested and won two traffic violations. I was impressed and made a mental note to myself to look into this if me or someone I knew ever received a traffic ticket.

My friend directed me to a website created by a team of individuals dedicated to help people contest traffic tickets:

Ticket Assassin
This website will teach you how to contest your traffic ticket entirely by mail, without appearing in person at court.

And if you lose your trial by written declaration, you then have 20 days to request a new trial (Trial de Novo). For this second chance, you actually do need to appear in court, but you get an extra chance to fight your ticket, or ask for a lower bail amount. Even if you lose the second trial, you can still go to traffic school.

It is extremely easy to fight your traffic ticket from the comfort of your own home. Watch this funny video guide that Ticket Assassin has made:
https://www.youtube.com/watch?v=ymTGDavCyDU

Since I did not believe my ticket was justified, I decided to contest my citation. It was the only way I could have a chance at winning my case, paying no fine, and having no conviction record or points on my DMV record. Oh and it would save me hours of time spent on online traffic school.

Ticket Assassin is shareware. For a $25 donation, you get full access to all the forms needed for fighting your ticket. You also get pre written example letters and specific hand-holding instructions on how to properly submit a not guilty plea, trial by written declaration and trial de novo.

Shortly after I signed up for an account at Ticket Assassin, I made my $25 donation. Patrick at Ticket Assassin was extremely helpful in personally answering all the questions I had about the process and he even helped me proofread my not guilty plea! I figured that even if I did not win my case, I learned a lot from Ticket Assassin and they gave me the hope, opportunity and guidance to fight my case.

Then I mailed my documents and bail to my local courthouse with certified mail and anxiously waited to hear back from the court.

Note: When contesting your traffic citation, you still need to mail the total bail amount with your paperwork. If you win your case or get it dismissed, the court will refund you a check.

Well folks, I’m excited and happy to report that after a month and a half of waiting, I just received a letter from the court regarding my trial by written declaration. Here was their final decision: 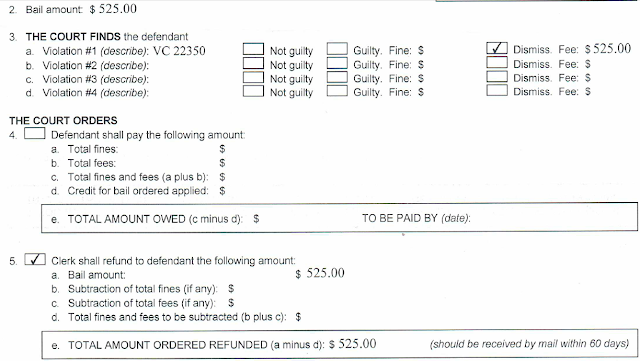 The court has dismissed my case and they are refunding me my full bail amount of $525!

For more information about contesting your traffic ticket, I highly recommend checking out TicketAssassin.com. If you want go through this entire process for free, you can also get tips at: HelpIGotATicket.com.  I didn't want to make any mistakes when contesting my ticket, so I happily paid to get help from Ticket Assassin.

The next time you get a traffic ticket, considering fighting it. It's a lot easier than you would think. If you can save yourself hundreds of dollars with only a few minutes of work, I would say that is a huge return on investment. Good luck.