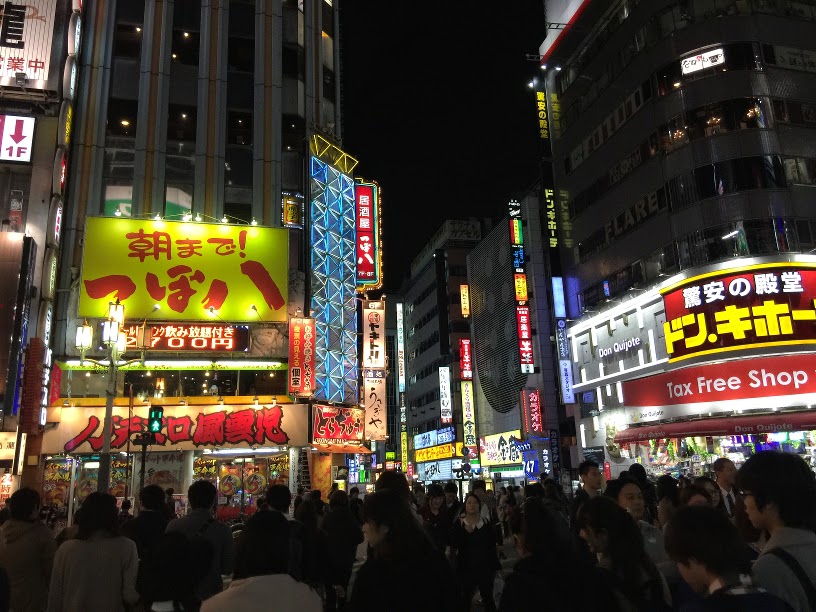 Shinjuku is another special ward of Tokyo that we explored.  This part of Tokyo is known for its entertainment and shopping areas.  It’s also known as the sleazy part of town, as it includes Japan’s largest red light district.  There are tons of restaurants, bars, and clubs in this area.  We came here mainly to check out the Robot Restaurant show and eat some delicious food. 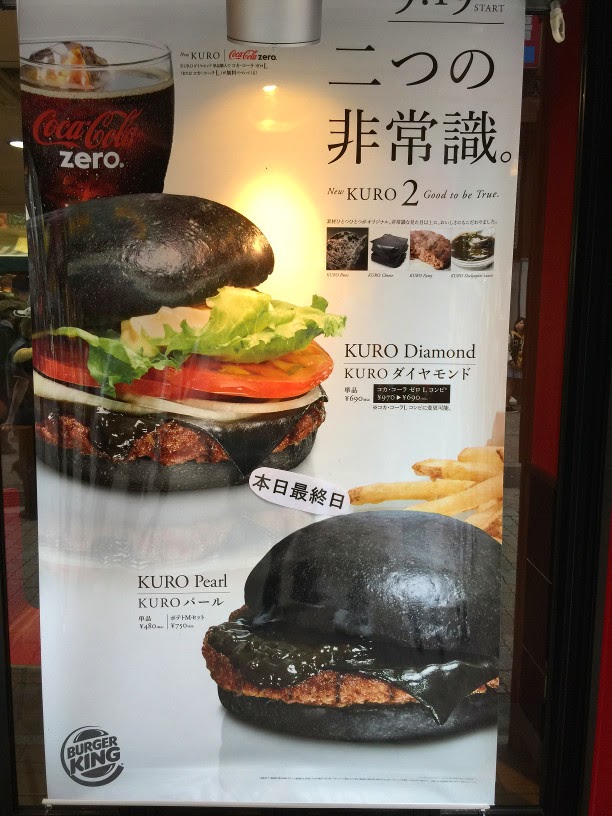 Called the Kuro Burger (“Kuro” means black), this black cheeseburger had black buns, black cheese, and black sauce.  I had to give it a try. Although the black burger I received definitely didn’t look like the way it was presented in the picture, I have to say, it wasn’t bad! 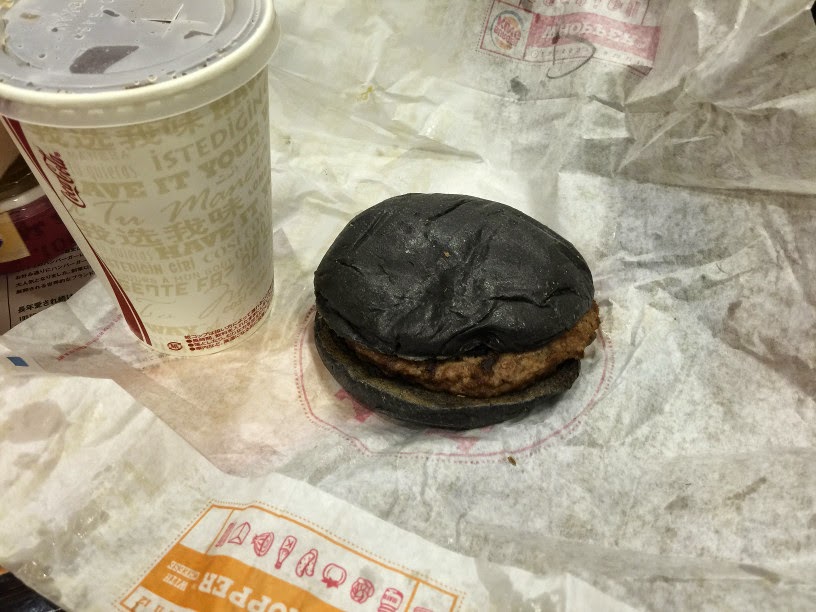 The burger patty tasted like Salisbury steak, which isn’t exactly gourmet but the meat was better than what you’d find at a Burger King in the U.S.  The most unappealing part of the burger was the pitch-black buns, and for the most part they tasted just like regular burger buns. 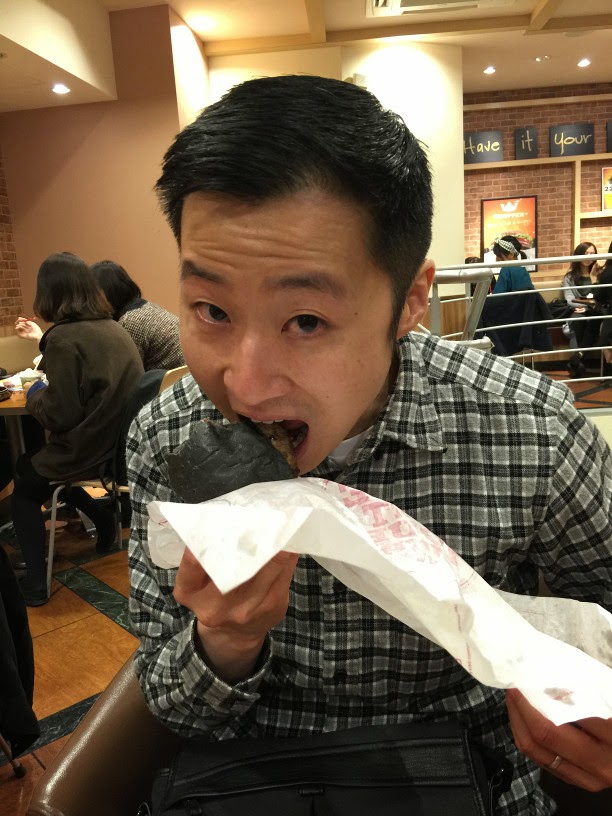 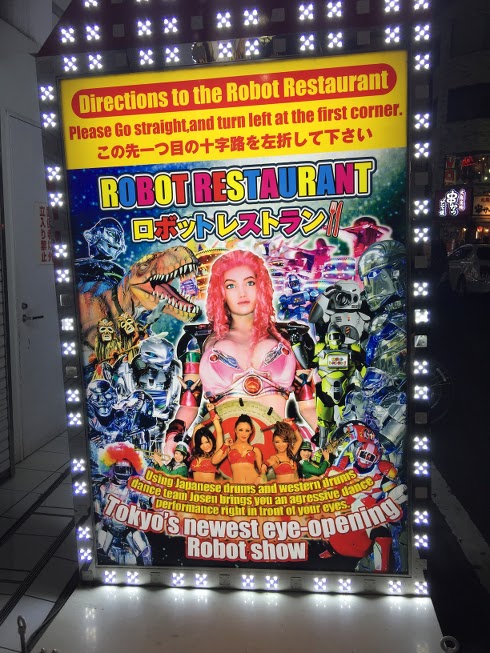 The advertisement for this show reads:

“Robot Restaurant bursts onto Shinjuku’s sizzling entertainment scene with a 100 million dollar splash in 2012, and has attracted the likes of Hollywood directors and actors to witness its high-octane, smash-hit robot showdown.  Prepare to be blown away!”

The Robot Restaurant is basically made up of 2 shows: one 30 minute live music show followed by a 90 minute random show consisting of Japanese drummers, boxing robots, dancing robots, and lots of music and light effects.

When you first enter the restaurant, you are seated in a lounge where you can order some appetizers or beer. 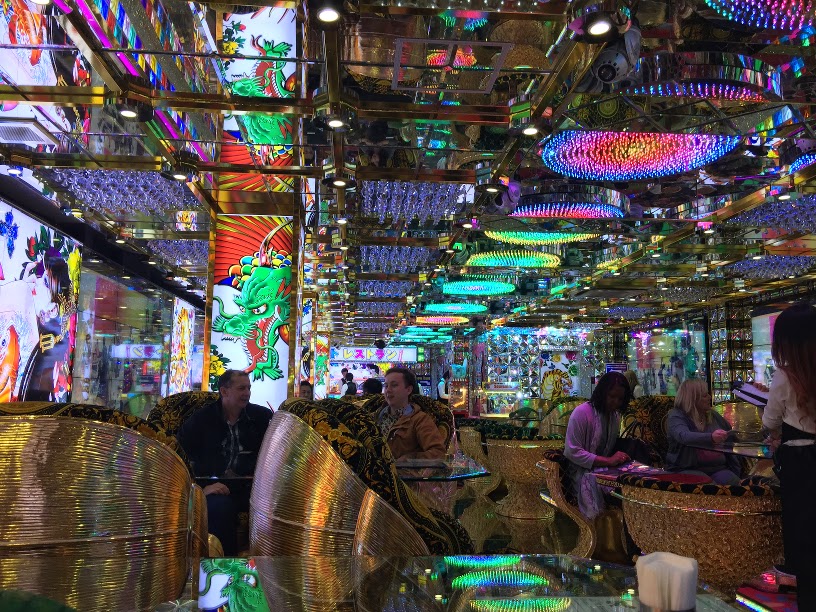 A Pleo robot dinosaur was put on our table to entertain us. 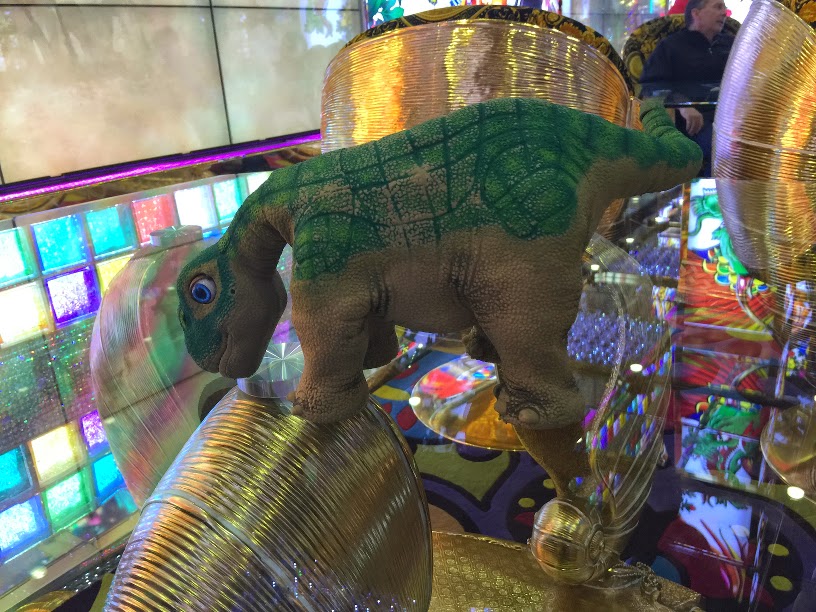 The live band played several smooth Jazz songs for us while we waited for others to arrive at the restaurant. 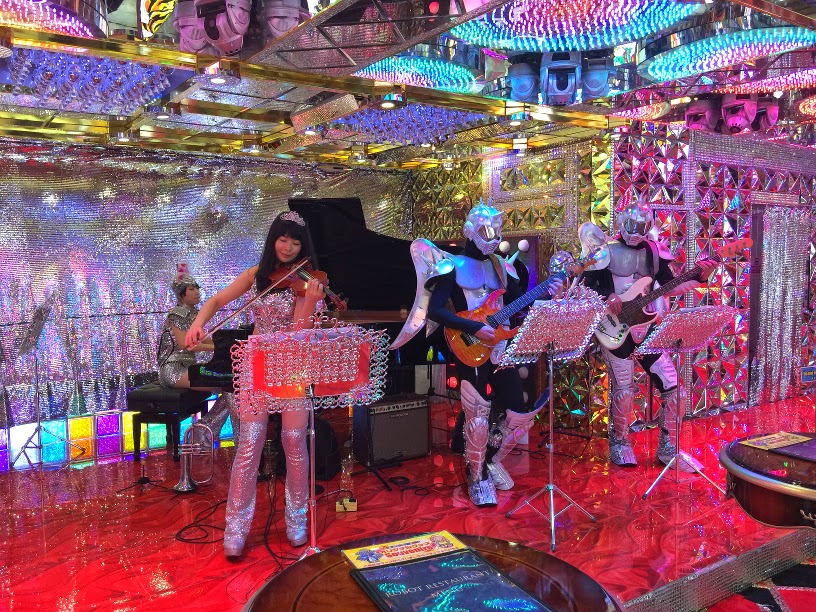 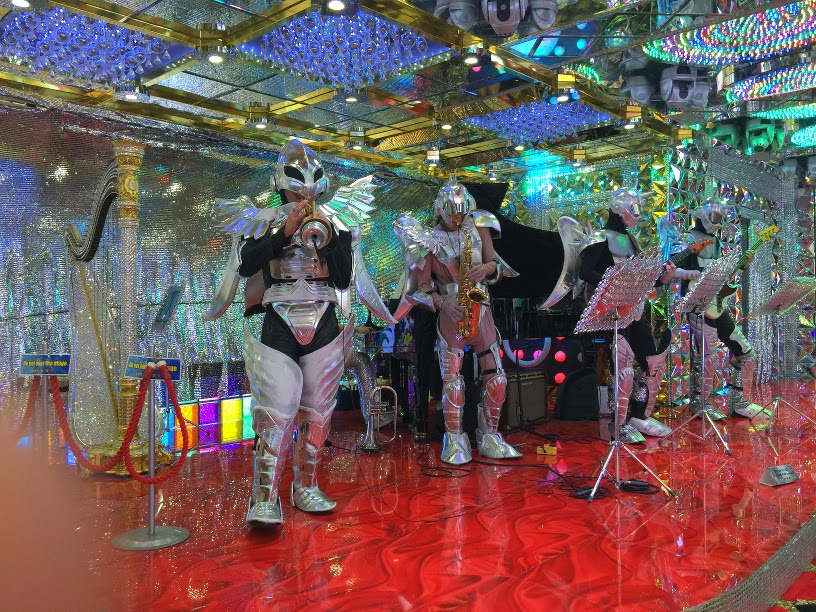 Afterwards, we were taken to our seats for the show to begin.

We were surprised at how random the show was.  Everything was in Japanese, so we had no idea what was going on.  The show started with the loud choreographed drummers. 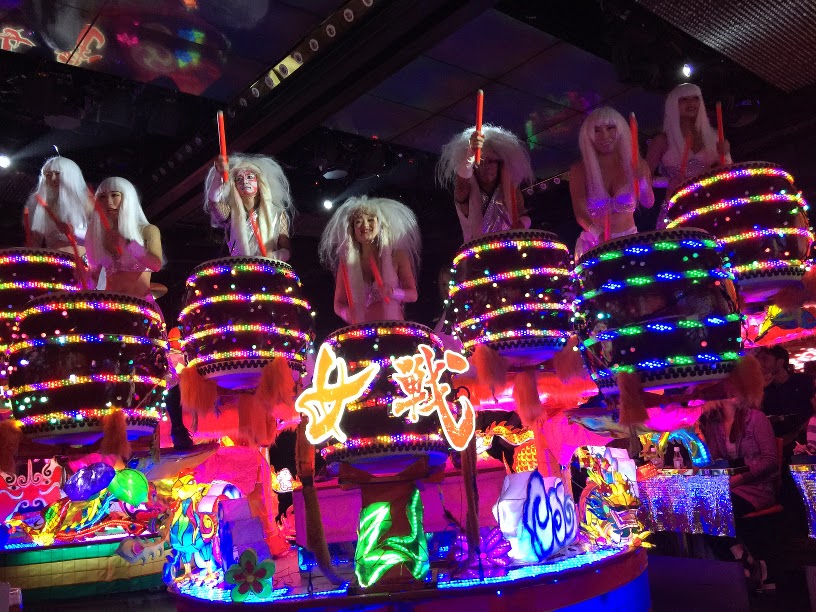 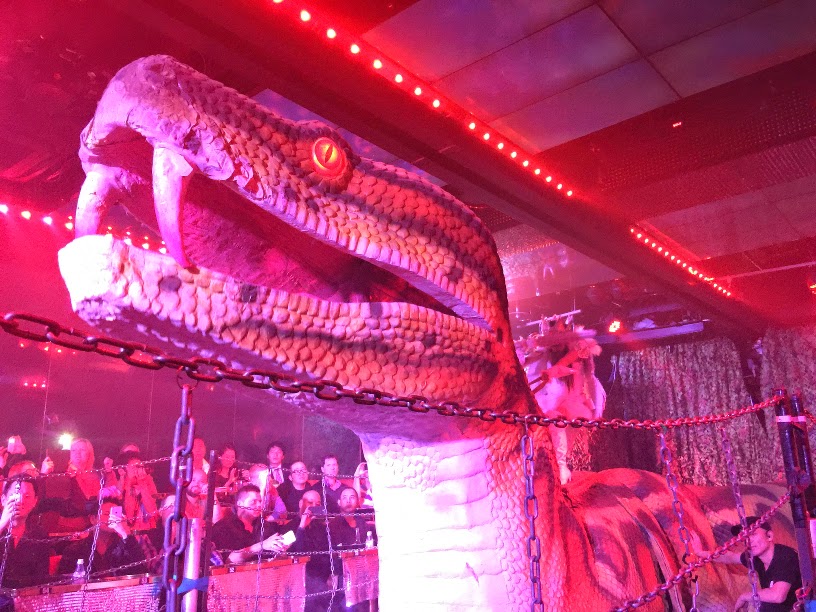 A robotic shark also came and chewed up a smaller robot.  The show was completely random and fun.  There was music, dancing, lights, and robots.  What more could you ask for? 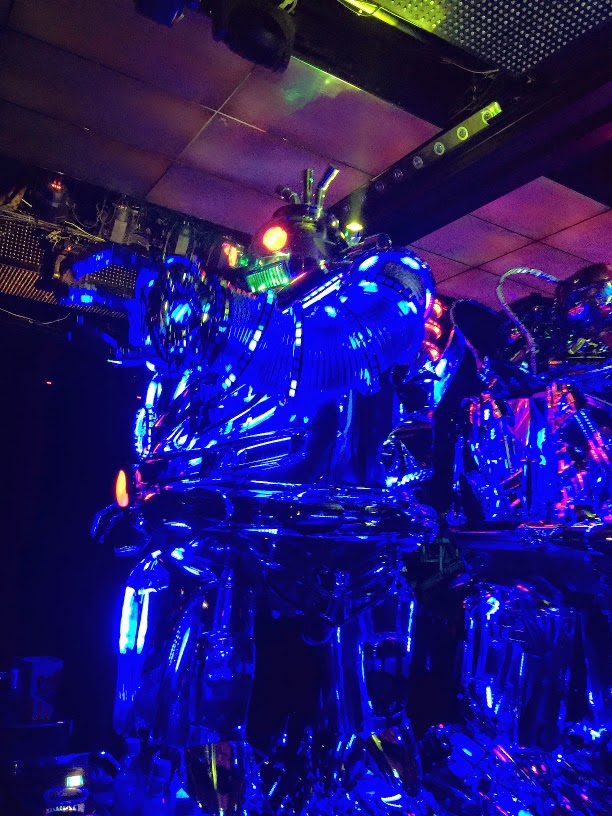 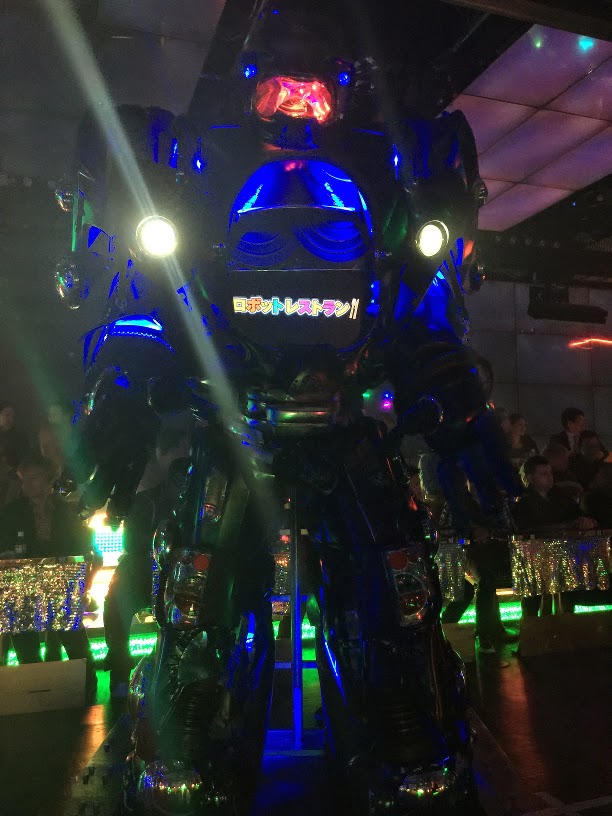 The only downside that we could think of was that there was a lot of down time between the robot skits.  While this gives you plenty of time to use the restroom or order more alcohol, the many breaks slowed down the energy of the show. 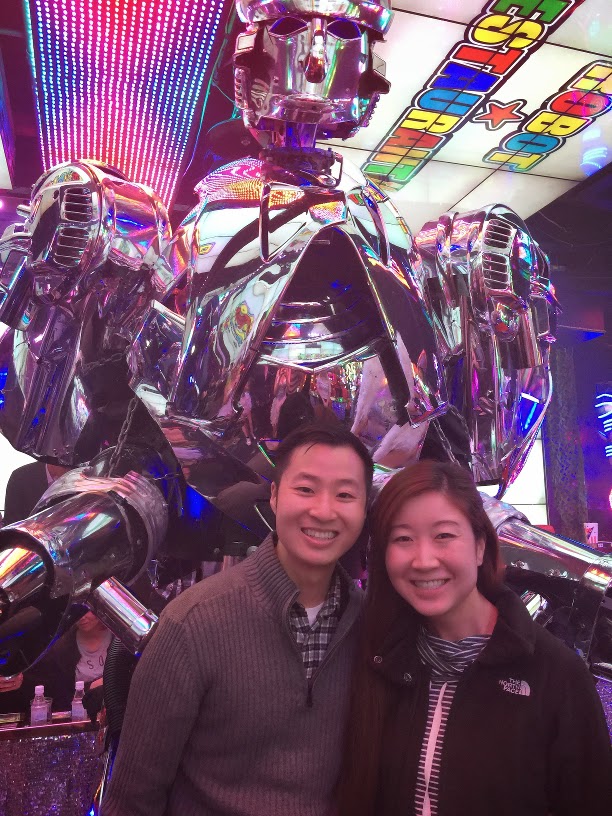 The Robot Restaurant serves food and alcohol, but eating here is optional.  Based on all of the negative Tripadvisor reviews on the food, we passed on the food and opted to grab a late dinner at Ichiran Ramen.  The bento boxes served at the restaurant didn’t look too tasty.
The show cost us 10,000 yen or $85.  It was a bit on the expensive side, but definitely a lot of fun.

Ichiran Ramen
When we asked around for the best Ramen in Tokyo, Ichiran came up often. 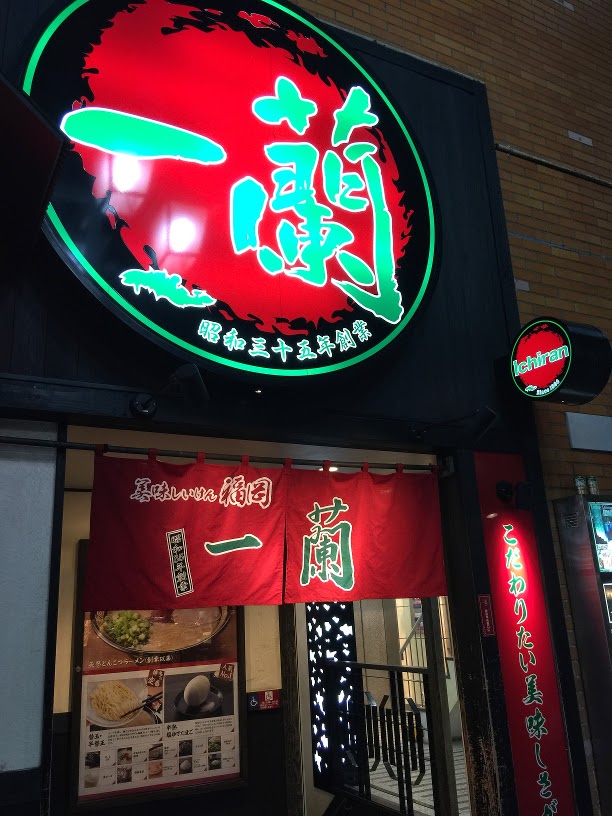 We got here early and did not have to wait very long.  You first order your ramen from a vending machine, which spits out a ticket. 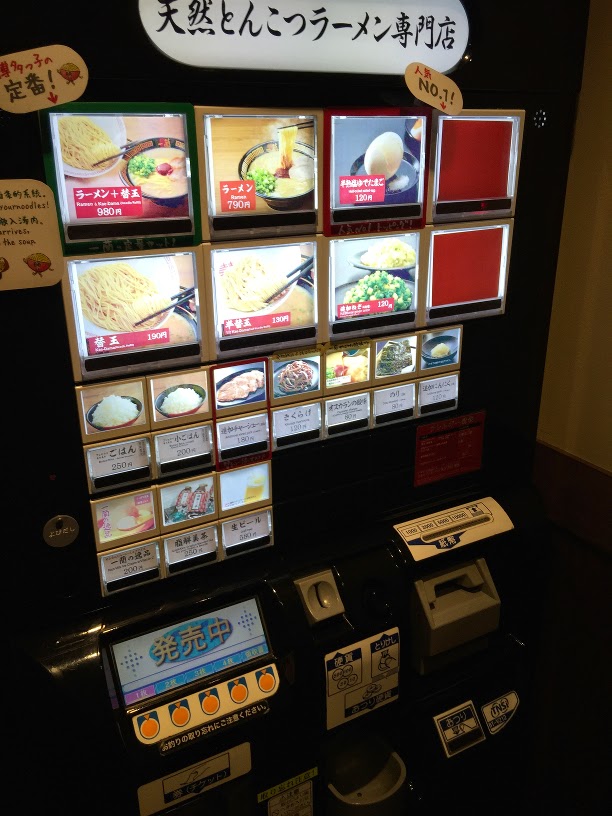 Then you wait in another area to be seated into individual cubbies.  Your neighbors are blocked off with dividers and you don’t get to see any of the servers, which are blocked off by a curtain. 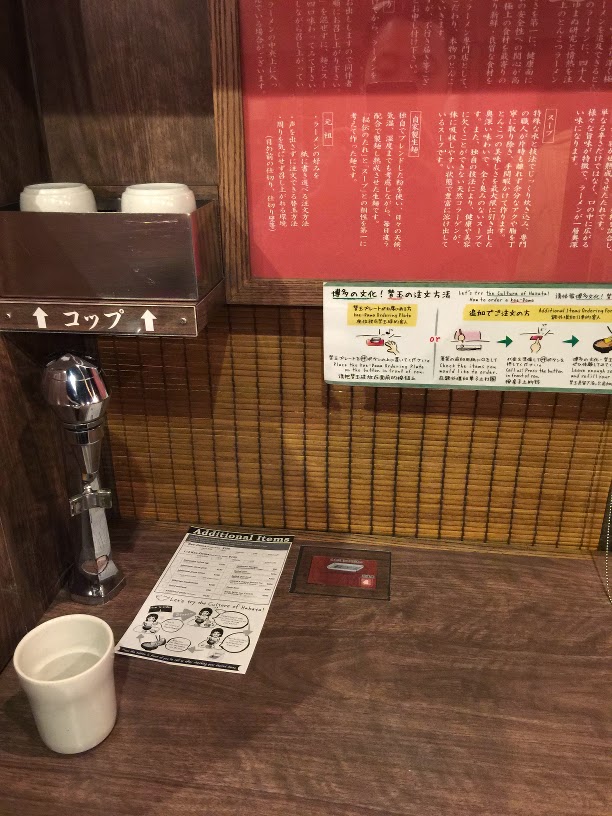 Your ramen is completely customizable, from the flavor of soup, type of noodle, to type of pork, and toppings.  Once you are seated, you can serve yourself water.  When your food is ready, the curtain in front of you opens, and then you get your delicious ramen placed in front of you! 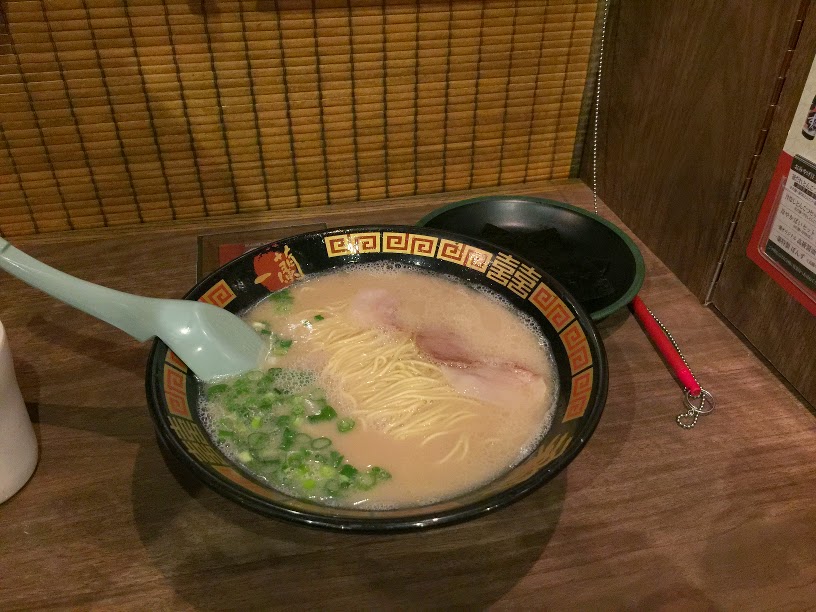 The ramen was custom made to our liking exactly the way we wanted.  My wife felt like Ichiran Ramen offered the best ramen we tried.  Two bowls of ramen for the two of us cost 1,660 yen or around $14 for the both of us. 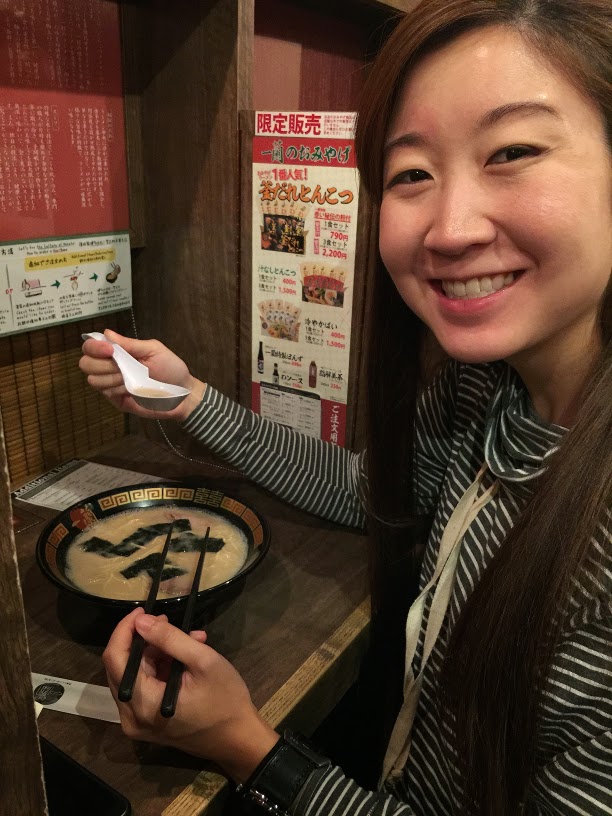 That’s all for Shinjuku.